I made an 18th-century hedgehog-shaped dessert so you don't have to. The original recipe was published in English cookbook author Hannah Glasse's The Art of Cookery Made Plain and Easy in 1747:

"Take two pounds of fweet almonds blanched, beat them well in a mortar, with a little canary and orange-flower water, to keep them from oiling. Make them into a ftiff pafte, then beat in the yolks of twelve eggs, leave out five of the whites, put to it a pint of cream, fweeten it with fugar, put in a half a pound of fweet butter melted, fet it on a furnace or flow fire, and keep continually ftirring till it is ftiff enough to be made into the form of a hedge-hog, then ftick it full of blanched almonds flit, and ftuck up like the briftles of a hedge- hog, then put it into a difh. Take a pint of cream, and the yolks of four eggs beat up, and mix with the cream I fweeten to your palate, and keep them ftirring over a flow fire all the time till it is hot, then pour it into your difh round the hedge- hog; let it ftand till it is cold, and ferve it up.

Or you may make a fine hartfhorn-jelly, and pour into the difh, which will look very pretty. You may eat wine and fugar with it, or eat it without.
Or cold cream fweetened, with a glafs of white wine in it, and the juice of a Seville orange, and pour it into the difh. Jt will be pretty for change.
This is a pretty fide-difh at a fecond courfe, or in the middle for fupper, or in a grand defert. Plump two currants for the eyes." 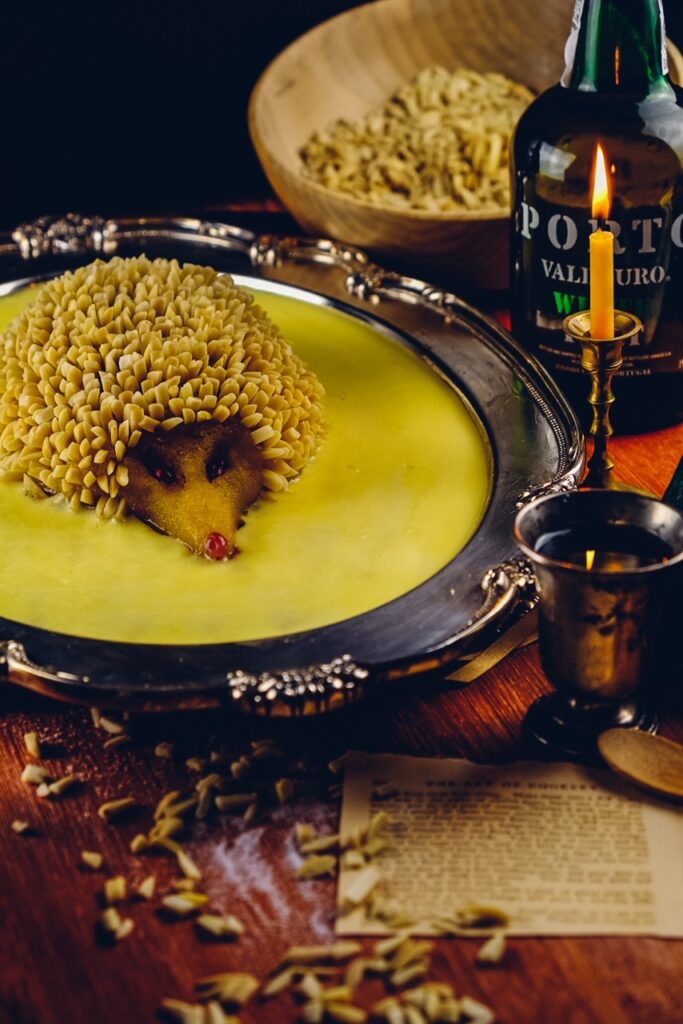 Hannah Glasse published the cookbook as an alternative to French cookery. Glasse was openly critical of French cookery which was the dominant style at the time. She felt French cuisine was expensive and wasteful, and that it was a disservice to middle and lower class cooks. Here's a quote from The Art of Cookery's introduction:

"A Frenchman in his own country will dress a fine dinner of twenty dishes, and all genteel and pretty, for the expence he will put an English lord to for dressing one dish. But then there is the little petty Profit. I have heard of a cook that used six pounds of butter to fry twelve eggs; when every body knows, that understands Cooking, that half a pound is full enough, or more than need be used: but then it would not be French. So much is the blind folly of this age, that they would rather be imposed on by a French booby, than give encouragement to a good English cook!"

Although I agree that frying a dozen eggs in a pound of butter is excessive, the quote is quite ironic considering Glasse herself wrote a recipe for a massive marzipan hedgehog surrounded in what is essentially a crème anglaise.

When following her hedgehog recipe I tried to be accurate, but I decided on a few small changes. I reduced the ingredients by half because two pounds of almond flour would have made way too much hedgehog. And to be honest, the reduced recipe was still quite a bit too much hedgehog. I decided to use blanched super fine ground almond flour instead of grinding my own like the recipe directed. I also used pomegranate seeds for the eyes instead of currants. The last small change was the Canary, a sweet fortified white wine that was commonly imported from the Canary Islands to England during the 18th century - but I was unable to find any. I chose white port instead. 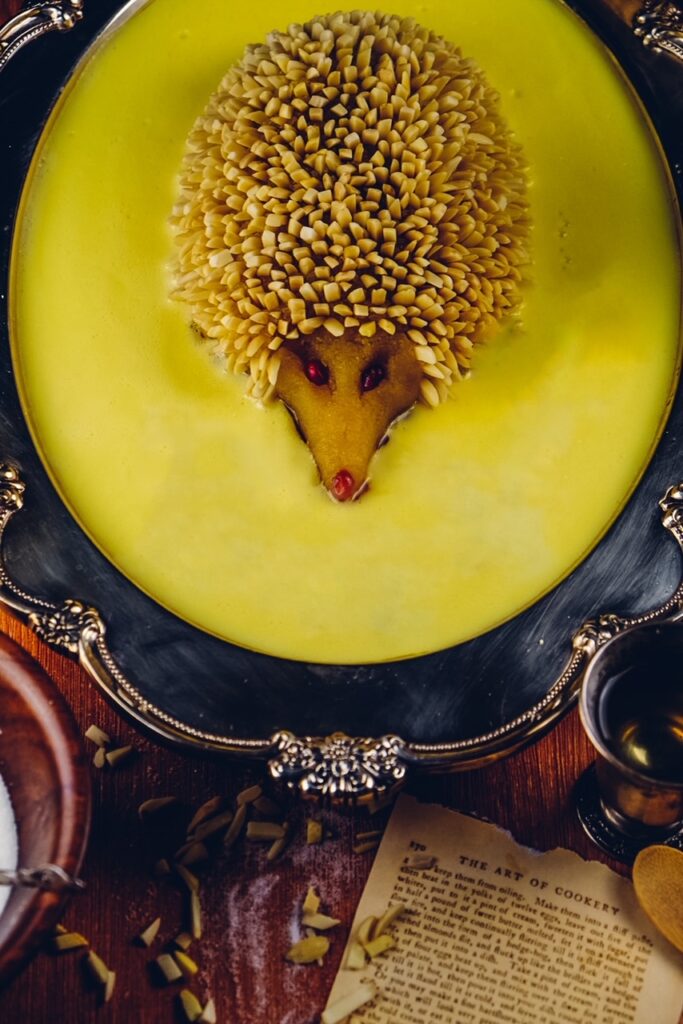 This dish was interesting to make... but it wasn't enjoyable to eat. It was eggy, thick, and somehow didn't taste like almonds despite being made out them. There was so much fat in this dish that melted butter was oozing out of it while I was forming it - even after the mixture cooled a bit. Despite being slightly unpalatable, the dessert was visually stunning. If I were to do this again, I would make a traditional marzipan but I would still use the port and orange flower water for flavor.

I made the full recipe amount of crème anglaise because I had a very large serving dish to fill. Reduce the recipe depending on the size of your serving dish. Good luck to anyone who gives this a shot.

In a large heavy-bottomed pot, mix together all of the almond flour, orange flower water, and white port. In a small sized bowl, whisk all of the egg yolks plus the one egg white. Add the whisked eggs, melted butter, heavy cream, and sugar to the heavy-bottomed pot. Using a large wooden spoon, stir everything together. Set on medium-low heat and stir or whisk frequently until the mixture thickens - about 15 minutes. Watch the temperature carefully - the mixture is easily burned. Once the mixture is thick enough to hold a shape firmly, place on the serving dish and let it rest for five minutes. Wipe up the butter ooze, and then shape into the form of a hedgehog. Decorate your hedgehog with slivered almonds and add the pomegranate seeds for the eyes.

Make the crème anglaise. In a heavy-bottomed pot, add heavy cream, all of the egg yolks, and sugar - whisk everything together. Start heating the mixture over low heat but gradually increase the heat to medium while whisking continuously. When the mixture coats the back of a spoon, it's thick enough. If you notice any cooked egg lumps, strain the custard. If serving immediately, carefully pour the crème anglaise around the hedgehog. If you plan on serving later, chill the hedgehog and crème anglaise in the refrigerator separately. 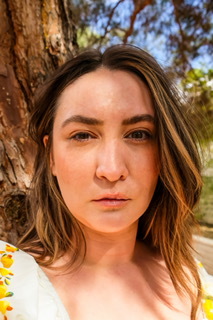 Creamy Lima Beans Inspired By The Arm Of The Sphinx 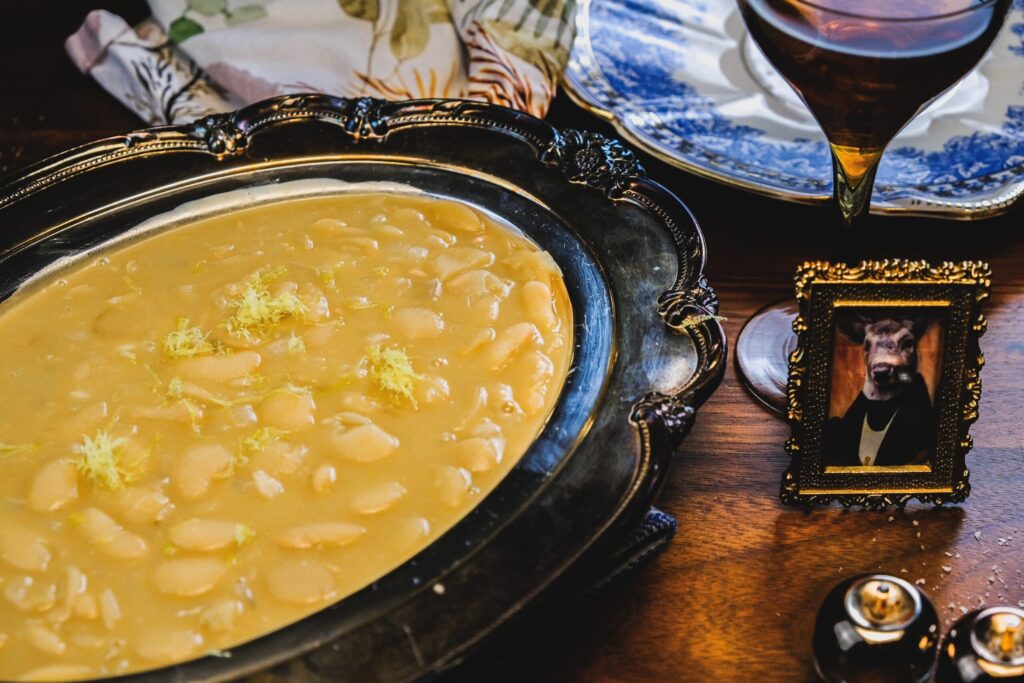 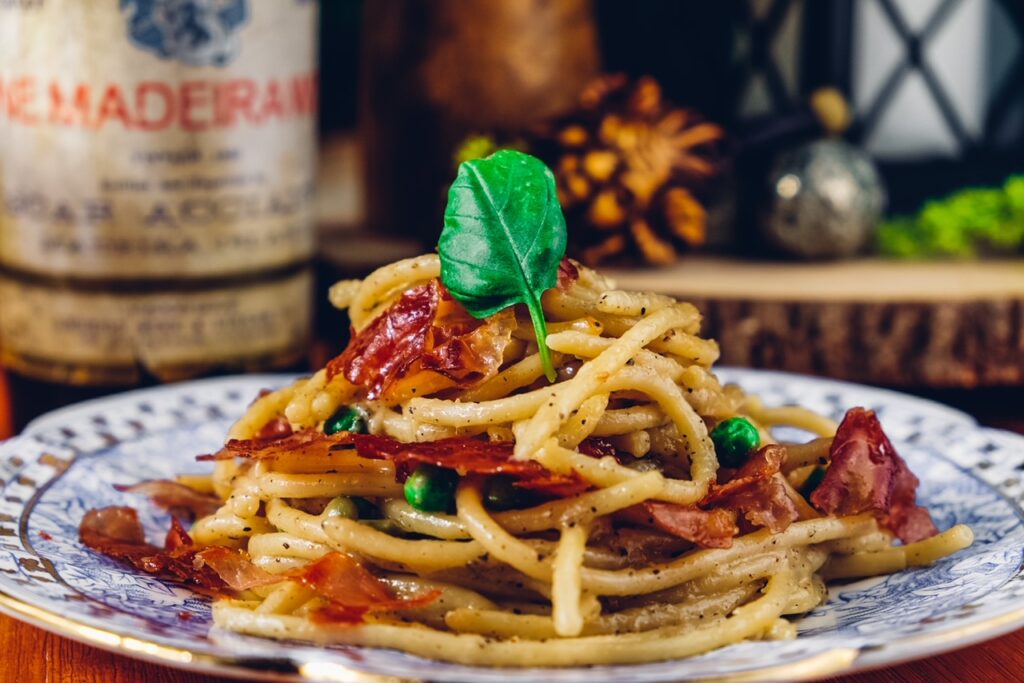